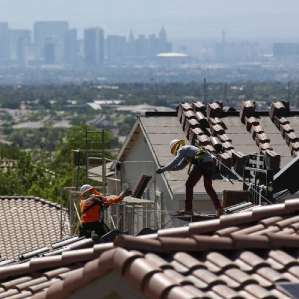 A Northern Nevada labor union has inadvertently revealed the truth about the prevailing wage.

Earlier this month, the Laborers’ International Union of North America Local 169 filed a complaint against the Sparks Redevelopment Agency. The secretary-treasurer of the union is Assemblyman Skip Daly, D-Sparks. The redevelopment agency owned a four-story parking garage in downtown Sparks. It gave the garage, with an assessed value of $950,000, to a developer to build a 10-story, high-end apartment complex on top of the existing structure. In exchange, the city received 90 parking spaces on the first floor of the garage to use as free public parking for the next 50 years.

An analysis found the value of those parking spots is $54,000 a year. The union then claimed that, over the five-decade length of the deal, this translated into a public benefit exceeding the value of the building.

LIUNA Local 169 is correct that there is something worrisome about this. Giving away a four-story parking garage for future parking on one level looks a bit ridiculous. But the union isn’t concerned about saving taxpayer money. Far from it. Because the value of the public parking exceeded the value of the building, the developer under state law didn’t have to pay the prevailing wage.

The conclusion is unmistakable. If the developer had to pay the prevailing wage, workers would have been paid more. That’s why LIUNA Local 169 is upset with the redevelopment agency and developer’s arrangement.

That’s an entirely different story than what legislative Democrats espouse in Carson City. Last session, Mr. Daly was a primary sponsor of a bill to increase prevailing wage requirements on school construction projects. Every Assembly Democrat co-sponsored the bill. During the presentation on the proposal, Democrats trotted out UNLV professor Jeffrey Waddoups, who implausibly claimed that a reduced prevailing wage requirement wouldn’t lower school construction costs.

Actions speak louder than words. Mr. Daly’s union wants the project developer in Sparks to pay the prevailing wage, because it would increase worker pay. That would increase developer costs. The same thing happens with schools. When you force schools to pay above-market wages for labor, it increases costs for taxpayers.